I do not understand why some of our nation’s leaders are doing what they are doing.

Because I do not understand their actions, I have gained even greater clarity about why I do what I do as a theological educator at Wake forest University School of Divinity.

Today is summer solstice in the U.S., a day when the sun shines longer than on any other day of the year. Hostile and violent forces are at work in our world today to keep hurting people from knowing the hope and warmth of life’s light. We need these extra hours of sunlight to seek how to live God’s Gospel truth in our times. We need a summer solstice Epiphany.

What is a summer solstice Epiphany?   The ancient sages in Matthew 2, commonly known as the wise people in the Christian Christmas story, followed a God-flung orb of light to Jesus’ birthing place. Many Christian traditions have located the story of the sages’ journey on day of the liturgical year in January known as Epiphany.

The word “epiphany” means “manifestation” or “a striking appearance.” We cannot wait for another January to look for God’s light to reveal a way for the human community to journey toward justice and renewed hope. We need to ask now what the manifestation of God in Jesus means in a world where so many fear for their lives, where too many innocents are abused and slaughtered. How are we who live in a world of such harsh and immoral realities to incarnate Incarnation—right now? These questions are urgent. People’s lives and well-being are at stake.

Matthew’s Epiphany story reveals powerful wisdom for our times. The sages, upon encountering the child Jesus, went home by another way (Mt. 2:12). I am struck by two things about this story on this day in 2018 of creation’s longest light. First, the sages had a home to go to. They were people with positions of power in their contexts. They could go home. Second, the sages decided to take different, less familiar route home to resist doing what Herod asked them to do. They decided not to take a route that would perpetuate a state-sanctioned system of violence and injustice. They risked something about their own lives because of what they encountered in the faces of a young child and family. Could they have gone back to confront Herod? Perhaps they should have and perhaps they did. What we know is that having encountered the truth of who God is in the face of a child, their usual way of going was changed.

This is why I do what I do as a theological educator who is also a Presbyterian Church (USA) Minister of Word and Sacrament. I believe this is also why we do what we do at the School of Divinity. We invite students to be aware of their power as human beings and religious leaders to resist Herod by following the unexpected ways of the Gospel. We spend time in conversation, worship, and prayer across our many differences seeking God’s wisdom for how we live and learn together. We also foster in each other a capacity to discern ways to risk something about our own lives for the sake of the lives of vulnerable others. This is work worth doing—work that must be done—in a world where too many people are denied their worth as human beings.

On this day in June 2018 when the God-flung orb of light called the sun looks out from the skies longer than on any other day of the year, perhaps our souls will be stirred anew. Now is a time for us to shine the light of Gospel truths on lies perpetuated by people who abuse their place and power. Is this stirring—this call—new? No. We here in the U.S. need to lament and atone for a history of injustices justified by people who have bent and are bending their version of the Gospel toward their own ends. We are haunted by questions today that have followed us across the landscape of our history. Have we forgotten or perhaps never understood what it means to be children of God created in the image of God?

We need Epiphany. We need a new understanding of and commitment to what it means to be human together, created in God’s image and living in community here on and with God’s earth. I do not understand why some of our nation’s leaders are doing what they are doing. I do know why I do what I do at the School of Divinity. I do what I do to encounter and be in community with students whose passion for ministry and whose deep belief in the power of Gospel Good News make me continue my vocational journey in transformed ways. I do what I do at the School of Divinity because I believe our work together changes us and sends us out, knowing that we are called as we go to risk something about our own lives for the sake of the lives of others.

I wrote the following poem/prayer for a January Epiphany Day. I have revised it for this summer solstice call to Epiphany.

Ah, the peculiarity of Christmastide Epiphanies:
shepherds
cows and sheep and donkeys,
an angel-frightened teenager
and a dream-troubled carpenter.
sky-gazing Zoroastrians
on camels’ backs
tracing a celestial light-beam to an
unfamiliar place.

But what of the rest of the story?
Menacing messages from powerful places,
weeping of innocents,
mama and daddy,
baby held tight
fleeing
violence
death.
Did they know—
To keep their bodies safe
was to keep safe God’s Beloved Child
but only for a moment.

In all of it—
holy visits and visions and vistas
detours and deliberate stars
midnight border crossings
into unfriendly backyards
children’s cries
wailing lullabies
“Hush, little baby! Don’t say a word.”
Immanuel—-God-with-us?
In us?
Through us?
In spite of us?

Galactic light-spheres align yet again
Sacred solstice sun shines into night hours:
Burn away the fog of unknowing, O God.
Give us eyes wide-opened
by what we see.
Call us to another way
so that we risk our lives to
bring together
Life
Love
Hope 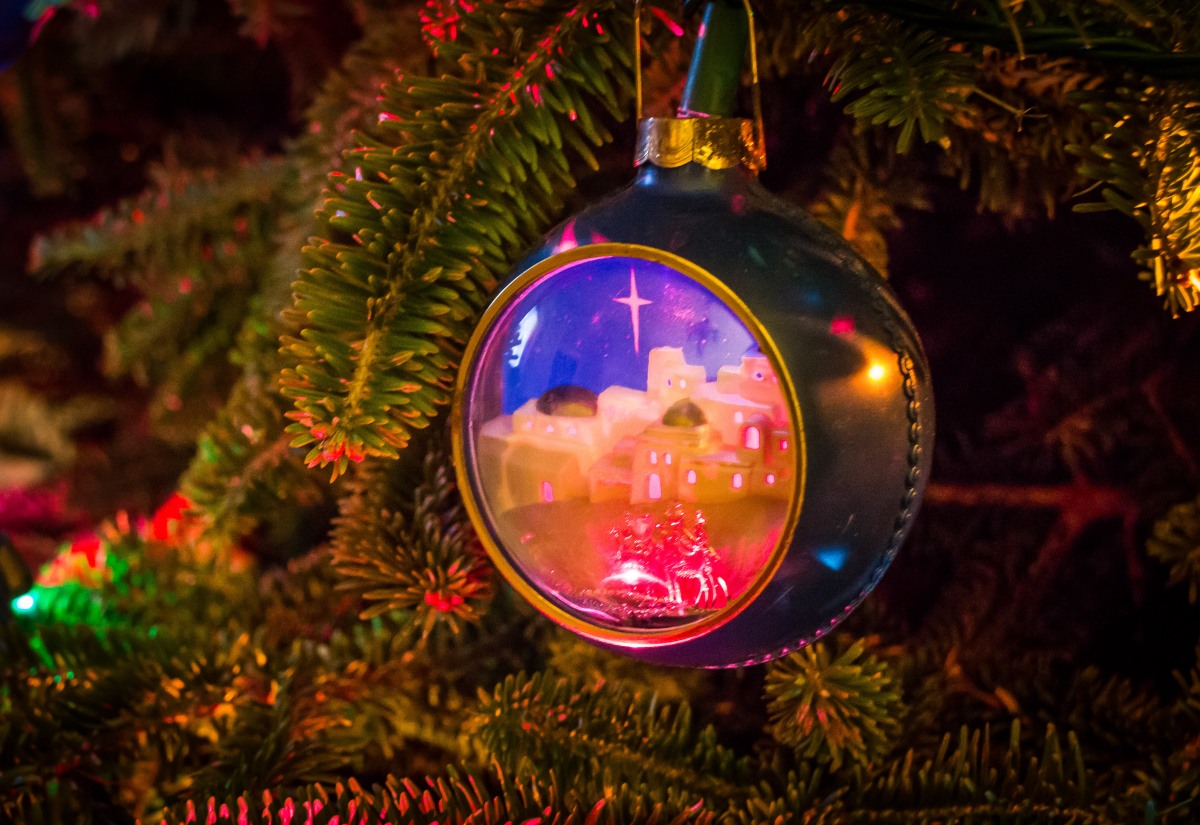 Note: the above photo is “Bethlehem’s Orb” by Sheila Hunter and is used by permission.

Tonight is Twelfth Night, the eve of Epiphany when we remember how magi from Persia followed to Jesus’ birthing place an unusual God-flung orb of light that appeared in the heavens. The word “epiphany” means “manifestation” or “a striking appearance.”

(The remainder of this post, including an Epiphany poem, is published on the Patheos Unfundamentalist Christian site linked below.)